May 5th is “Children’s day”, and it is mainly “Boys’ festival”.  Its festival is to pray for boys’ success and health, and on this day people hang out “Koinobori” (Carp streamers).

Carp are symbol of the strength or patience to accomplish their dreams, because the fish are believed to be able to climbing up stream against rapid currents.

On this day, we take a bath with the sweet flag’s leaves called Shoubu in Japanese.  It is believed to drive noxious vapors away from the body.

According to Sankei, the biggest project in England of railway business has started by a Japanese company, HITACHI. The Japanese railway operation is getting attention by Europe countries in earnest.

The project by HITACHI is the renewal of the railways which are becoming too old in England, and to manufacture 866 trains and continue inspection for the coming 27 years. HITACHI decided to even build a factory in England and from 2016, they will start manufacturing the trains.

It is not the only tangible side featured such as speed, safety or accuracy of service. The real advantage of Japanese technology is the intangible which is the knowledge and skill required to operate the railway business. HITACHI is accepting to introduce the while Japanese technology to England. According to the CEO of HITACHI rail in Europe, he says, Japan has great technology and experience which has been operating the bullet trains for 50 years.

Pad Thai is like a pan-fried noodles made by rice flour.

It looks like a picture above. Usually there are shrimp in it. That is actually one of the reasons I lke Pad Thai. When I was a freshman, I’d never tried it or even any Thai food. But when I went to Boston, last year, there were many great Thai restaurants there. Then I started to like Pad Thai.  Pad Thai in Boston was quite sweet which is good for me, but in Japan, we can have both sweet one and hot one.

I had this Pad Thai at a Thai restaurant in Sangenjyaya which is a part-time job place of my friend. Pad Thai here was so-so sweet and so-so hot one so that I enjoyed the harmony of both tastes. I highly recommend Pad Thai. I’ve never heard someone who dislike Pad Thai. So if anyone has never tried this, you should absolutely try it!!

Do you know Funassyi ?  He is a mascot character of Funabashi city, Chiba prefecture and one of the ゆるキャラ.  ゆるキャラ means loose character.  Recently, many kinds of ゆるキャラ are popular in Japan because they makes us heal.  Particularly, Funassyi is active in many TVs or events.  He is a motif of the pear because pears are a special product in Chiba prefecture.  His characteristic is a jumping ability.  He can jump 30 to 50 centimaters.  Also I live in Funabashi city so, Funassyi is my city’s symbol character.  I know his house but I have never met him so some day I want to see him.

AEON mall Makuhari-shintosin opened on December 20th in 2013.  This is a huge shopping mall.  We can’t completely look around in only one day.  There are 360 shops of which 91 shops are Japan’s first shops and 85 shops are Chiba prefecture’s first shops.  The nearest station is Kaihinmakuhari station and Shinnarashino station.  If you walk from station, it takes 15 minutes.  If you have interest, you should go !  But now is very crowded, so be careful ! 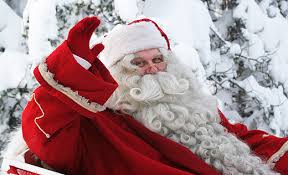 Everybody starts getting excited in December. When we walk along the street, we can see extremely ornate Christmas trees and hear fun Christmas songs. However, we can’t start talking it without Santa Claus!

Santa Clause is known as Saint Nicholas who is one of the saint representing education.  Our general image of him is wearing red coat, having white beard and reindeer ride. Although giving a gift for good children on Christmas night is what he does, in Germany people believe he has twin brother. He is in  black and brown coat and punish naughty children. Which Santa Claus comes to you? 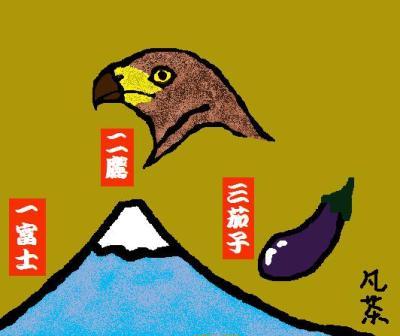 A happy new year. I wish this year would be full of joy and happiness and even better than last year. Well, we know everything goes well if the first action of it is successful. Japanese superstition says  several dream that you have on new year day would bring a good ruck. The best one is Mount Fuji, the second  is an eagle and the third is an eggplant. Japanese words have “Buji (無事）” which means safety. The dream appears Mount Fuji also means “Buji” throughout a year. An eagle is a symbol of intelligence and power in Japan. Therefore an eagle in dream means you would have great knowledge and achieve success. We say an eggplant in Japanese, “Nasu” and it also means “accomplish”. Additionally, people believe that a dream of  eggplants would promise your good health.

Did you have a good dream? If you have more information about Japanese superstitions, click here. This article said  Kiyomizu temple in Kyoto decided the official kanji of 2013, “輪” which means circle. It’s an annual event that monks in a high position at Kiyomizu temple decide one kanji explaining the whole year. The strongest fact influencing their decision is the big news that the Olympics will be held in Tokyo in 2020. We say Olympic in Japanese “五輪” because we can see 5 circles on its flag. Another reason is we had quite a lot of  typhoon attacks.

The pole said the kanji of 2014 will be “楽” means enjoy. What word do you want to select for this year?

January 15 is Coming of Age holiday in Japan.  It is called Seijinno hi in Japanese, every men and women turning to 20 years old will be celebrated its turning day at a Coming of Age Ceremony.  Women will be wearing beautiful Furisode, long sleeved Kimono, and man will be wear new suits.  In Japan, smoking, drinking and right to vote will be permitted in 20 year-old, so each needs to have self-awareness as an adult.

By the way, do you know why women at a Coming of Age ceremony wear long sleeved Kimono?  Furisode is actually worn only by unmarried women.  Not only at Coming of Age ceremony, they are able to wear Furisode at a flowery occasion like a party.  I also really love Furisode which is with white fir and beautiful hair arrangement.   If I could be back to the past, I want to take part in a Coming of Ceremony.