I’m sure everybody knows the soccer player from England, David Beckham.  He had constantly devoted himself from childhood to be a star!!!  And his hair style “The Mohawk haristyle” (Soft Mohikan in Japanese) became popular amoung Japanese young men. Beckham’s retiremet spread quickly, and In Economic Times, the member of Paris Sait-Germain Football Club he belongs did a famous Japanese tradition!

They tossed Beckham up  in the air! 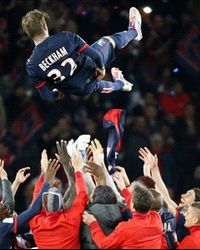 This tradition, Doage(胴上げ) in Japanese,  originally started in Zenko-ji (善光寺) in Nagano prefecture in Japan to bless somebody.  This tradition is usually done when turing points of the person’s life such as passing exams, winning elections and sometimes weddings.

I really like the tradition which we can show appreciation and blessing to somebody at the same time in the very lively way!  I hope to these Japanese tradition will spread more in the world.